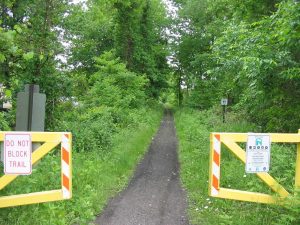 Help in Finding and Enjoying the Greenway

The Genesee Valley Greenway brochure, produced in 2006, contains a detailed map of the Greenway and may be downloaded from this web site by going to Trail Users – Maps.  The map is also available at area bicycle shops and tourist stops.  It may also be obtained by sending your name and mailing address to the FOGVG Office noted below.
Trail detours are noted on the map, including the one mentioned below as you leave Rochester heading south.  The following information gives details of the Greenway trail between Rochester and Scottsville.

A short distance along the Genesee Riverway Trail, there will be a turn off for the Erie Canalway Trail going east toward Pittsford over the bridge. For the Greenway, keep going straight. From here on, the Erie Canalway Trail and Genesee Riverway Trail are together and go over the canal on the arched bridge. (You will see the old Pennsylvania Railroad bridge on your right and a slight depression that was the canal prism, also on your right.)

The Greenway travels southwest along the river, crosses Weidner Road and then curves up to the parking lot for Peach’s Restaurant. If you wish to continue south on the Greenway, you need to bike south along Route 383, (Scottsville Road) until you reach Route 253, (Ballantyne Road). Turn right (west) on to Ballantyne to reach the Greenway again. You will know the Greenway by the yellow gates and the sign on the gates. There is also signage that will help guide you.

If you want to see a good example of an historic canal culvert, at Ballantyne Road head north on the Greenway, .5 mile. Just before the trail crosses Black Creek, take the path to the east down to the banks of the creek. You will get a good view of this rare double arched culvert.
The reason for the trail detour is that there is still active rail line between 84 Lumber on Scottsville Road and the east-west CSX tracks that cross Scottsville Road. Soon, a trail detour will be constructed along the west side of Scottsville Road that will establish a continuous off-road trail in this area. The trail was started a few years ago by Rochester Gas and Electric (RG&E) as part of an environmental benefits project, however, additional work needs to be done on the trail and on the rail crossing.

RG&E has also developed a paved parking area and pocket park north of 84 Lumber on the banks of Little Black Creek, just south of the Scottsville-Paul Road intersection. A hand carry boat launch has also been installed. From this parking area you can access the trail as well as view another historic canal culvert and waste weir.

From Ballantyne Road the trail heads south to Brook Road through a wooded environment. At the Brook Road trailhead, north side of the road, there is a large gravel parking lot with room for parking of horse trailers. A wood chip path leads over to the Greenway.

Another point of confusion may be the trail crossing of Route 383 (Scottsville Road) just north of the Village of Scottsville. The train used to go under the road, but when the road was reconstructed some years ago, the underpass was removed. It now creates a situation where the trail is twenty to thirty feet below the road and ramps have been constructed in this area.  The trail continues on the other side.